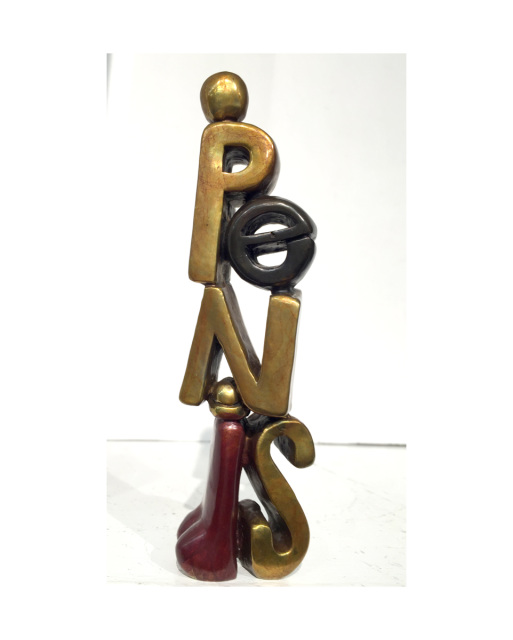 SKU:
$795.00
$795.00
Unavailable
per item
Penis Figure   bronze study
size  6"H  plus granite base
This is another word sculpture in my collection
i guess it was inspired by one of my relationships
along with the vagina figure.
boy meets girl scenario  : )
part of a set ,why wouldn't it be?
get the set

price includes shipping
1 available
Add to Cart
This sculpture the Penis Figure,  made  in 2015, along with the
Vagina Figure, is a dancing couple, doing the Tango.
available individually. First inspired by a relationship, as sexual beings, my  work
is autobiographical. I guess you may wonder, what was I thinking?
Mostly, my work is about Happy and the celebration of life, and the
wonders of human creativity, since this creative force, is part of the continuing
process of human evolution, for good or bad.
The Sex Force, is also the Creative Force
and in some cultures, this force can be re-channeled, for a more
powerful and vital works, for example, Tantic Yoga, better performance in sports,
more energetic artworks, that may scintillate at a higher vibration,
creating a more vital experience for the self and the observer,  just raising
your own vibration, for your own personal exploration of creativity, and focus.
Some religions try to use these principles, and practice celibacy, to be closer to God,
and to be more creative for the people in need, but for some reasons, (maybe dietary)
the sex force gets perverted, and we have a crisis in decadent behavior, for
thousands of years, until they are finally called on this anomaly. If this was a
corporation, don't you think it would be dismantled. Interesting to say the least
this very powerful life force.
So I make these things, since all around, life feels so
threatening.
It is part of the Alphabeyic Series, using
the alphabet as sculptural forms, a long tradition in Art of using words
or letters, to communicate ideas that pertain to the human condition.
So as an artist, this communication series, covers three art forms,
sculpture as form, words that have meaning(poetry, and story telling)
and music, as the spoken word, that we sing to each other, of our
higher calling.
So the Penis Figure, along with the Vagina Figure, a little provocative,
kind of humorous and silly, yet joyful and thoughtful, being somewhat
profane and edgy, yet classic in its appeal as a sensual and sexual
concept as a unique work of art, without being decadent, or
going for the lowest common denominator, looking for shock value,
the spectacle of things, since most people are so desensitized,
that unless it has those qualities, you will not get thru ones barriers,
that protect us from the harsh realities of life, and information overload.
So here you have the theatre of the absurd, to entertain you,
its all fun, The Penis Figure at your service. get yours today
limited production, made in san francisco, infused with Love
and the celebration of life.
doug